A Population of Indoor Cats

by Red Wine and Sugar 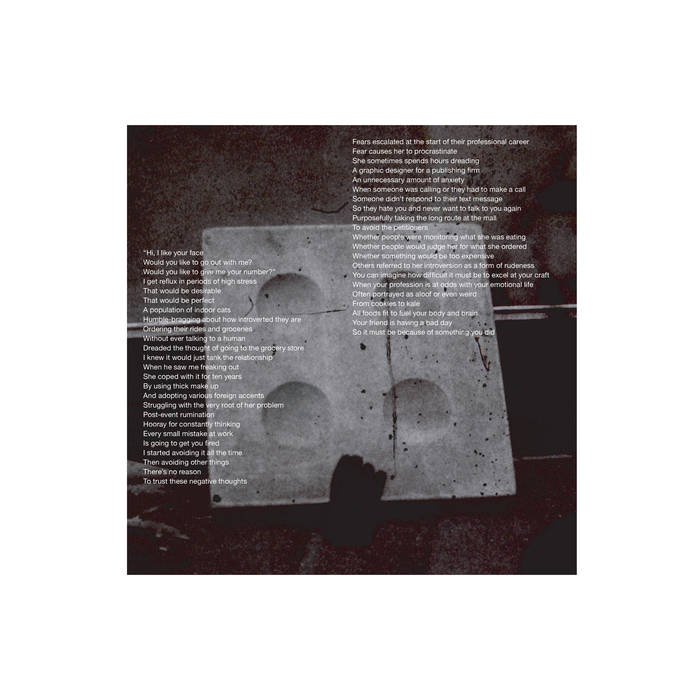 
Red Wine and Sugar is the collaborative project of Samaan Fieck (music/sound) and Mark Groves (voice/text). Both have been active as part of innumerable projects in the Australian underground music scene for many years: Groves as frontman for noise punks True Radical Miracle, in power electronics projects such as Dead Boomers and Absoluten Calfeutrail, and, most recently, in the woozy tape loops and colloquial soliloquies of his solo project Absurd Cosmos Late Nite; Fieck as a shadowy presence on guitar and sundries, shaping the explosive noise outbursts of Smash Tennis, the post-Dead C basement jams of outfits such as Ghost Gums, and the deconstructed rock moves of Where Were You at Lunch.

As gratifying as these projects have been, Red Wine and Sugar is where Fieck and Groves follow their respective muses furthest down the rabbit hole, occasionally surfacing to offer up another slice of their radically idiosyncratic combination of drily delivered text and concrète sound. Groves’ close-miked voice delivers a fragmentary litany of closely-observed suburban aperçus, touching on diets quickly abandoned, insomnia, peak-hour commutes, and the anxiety of the everyday. Occupying an uncomfortable position somewhere between ironic distance and earnest confession, his words capture the lowest rung of a ‘general all-purpose experience – like those stretch socks that fit all sizes’ (John Ashbery). These words are woven into Fieck’s intricate sound works, meticulously edited and detail-rich environments that touch on classic electroacoustic techniques, gritty tape-trader underground moves, and distant strains of drum machines and synth that pay tribute to the great works of 80’s art pop (Kate Bush, Peter Gabriel, Jane Siberry).


'That Book You’re Reading' - in the beginning I struggled to sync the Harman/Kardon speaker to my iPhone via Bluetooth. So I was off to a bad start. Listening to this new album through a tiny, tinny sounding speaker. Then, beep beep beep, speaker synced and a much broader sound came through into the room. Cavernous. Live sound. A dark, quiet place with incidental sound and tinkering. Eventually voice. Close voice with the spittle pops of saliva slapping around teeth and gums near a very good microphone. Or, at least, a very attentive and effective microphone. There’s space. “Hooray for constantly thinking”. “There’s no reason... to trust these thoughts.” I assumed the graininess in the treatment of the voice was chosen to conceal its content. Then, before the fog horns of a big boat on a wide sea sounds the voice was clearer. For me. Nearer. Genuine vulnerability in this soft voice. I leaned in and felt the voice. So textural and emotive. With the instruments. Not an amped advertising jingle or a warped relaxation CD. More focused uncertainty and puzzlement then meandering assuredness and all-knowing arrogance.

'From Cookies To Kale' - a Dad with a sound production degree has found a moment to tinker in his back shed. I can hear his kid whisper, chatting nearby as he sets up the drums. Then, a lonely organ bending purposefully. I love the way the percussive elements drop away when the secretive sounding voice speaks up. I’m worried for this narrator. Nervous that they’re in danger and someone is about to walk into their private room and bark “get back to work” or “what do you think you’re doing?”. There’s enough connection between sentences to establish a mood that’s distilled. Although not always linear. Never obvious. Plain language. Plain language always slays me. That is, I find it the most arresting and emotionally charged. Mark Groves excels at picking out the parts of English language he’s overheard or made up or thought of himself. He unravels a spool of feeling. I love this. Each utterance is both contained and whole. Open and limited.

'Fire Together, Wire Together' - who starts? In this case, Samaan starts. Out of necessity? Someone needs to kick things off. A power struggle? Listen to me. Don’t listen to me. Hesitancy. Inner tension. This piece, I’m eavesdropping on a really private moment. Somewhere between a clearing in a forest by a portable workshop and a nook under the stairs. Tiny filaments of feedback, tape crackle, inaudible human mutterings and mechanical drones overlap in harmony at times and with disinterest in the other’s role at other times. Could be planes overhead. Could be working on a broken transistor radio trying to get back in touch with the Mainland. Synthetic sounds from a studio. Music for film and field recordings. Nothing to see here and please focus. Listen intently, “you need to hear this.” Then footsteps on gravel, gorgeous piano, wind-up toys, Mark’s hushed voice, natural, unaffected. Inside sounds. Outside sounds. “Life would be boring if there was such a script.” “Molesting a child” “rehearsing your coffee order” “Raping someone.” Fear. Impending violence. Doom. Deep deep indifference. Strong black humour. Maybe an electric guitar chord. Get out of town. A kinda chord. Not a riff? Get fucked. I do love this conversation between free sounding improvisation, language blocks, associated meanings building up for me in a very personal way. Composed songy bit with a classic backbeat and a Motown tambourine. File under Soul? Spoken word? Exploratory fact-finding mission?

'Regarding Knives' - a child’s high-pitched voice remnant engulfed by ominous metallic sounds made in cans on a computer. You are not alone. Tuning in to outer space frequencies. Go away child. I’m listening. I’m really listening. I don’t know how it’s achieved. The sound of distance. When a texture stretches back into my speaker. Or across its dome. Metronomic robot synth footprint and just ‘nearly not quite’ a human speaking. I watched Total Recall at work last night. Schwarzenegger’s deep monotone earnestness. The malevolence and body horror. The rashers of old bacon defrosting in the residents’ freezer smelt like shit. We opened up the door, but the foul odour would not leave. He came back from hospital still on Imeprazol and was due for another check-up in 4 weeks. Then the end of this ‘song’ felt like a bedtime story with the high plucked sound of one of those ballerina in a box wind-up toys. “tight rope... crocodiles”. I can see these words. Real warmth. Measured hope. “Family member or friend”. The sound of wind. These two making this thing have a good relationship. They feel each other. Hear where the other is coming from. Pick up what the other puts down. I can sense they’re communicating and moving energy together. And that me listening or not is of no deep consequence to them. It was good for me. Plenty of stars. At one stage Ruby walked in. She’d had fuck all sleep last night. “This sounds beautiful”. I made an annoying sound of agreement like I’d just sipped fine wine and appreciated its terroir but was really quite frightened the sommelier knew I didn’t have a clue and just wanted to get drunk. “Do you mind if I put on the Crazy Rich Asians Soundtrack after this?” “No, not at all.”

Bandcamp Daily  your guide to the world of Bandcamp